I started playing guitar almost three years back and at that time I had wished it would have been better if I had picked this lovely instrument during my college days. Well, we always repent things we don't do. The guitar was one of such things. But then I read this quote in one of the answers on Quora.

The best time to plant a tree was twenty years back and the second best time is NOW.

I strongly believe in the power of NOW. So without thinking much, I started learning guitar in the month of June 2014.

While I have been playing guitar for almost three years, I have also enjoyed learning about the music theory alongside. So I thought it will be a worthy attempt at explaining the music theory I understand. I may not have the answer to all of the questions but I can cover the basics.

In a series of posts, we will talk about:

B and E has no sharps.

So in total, we have twelve notes in music. 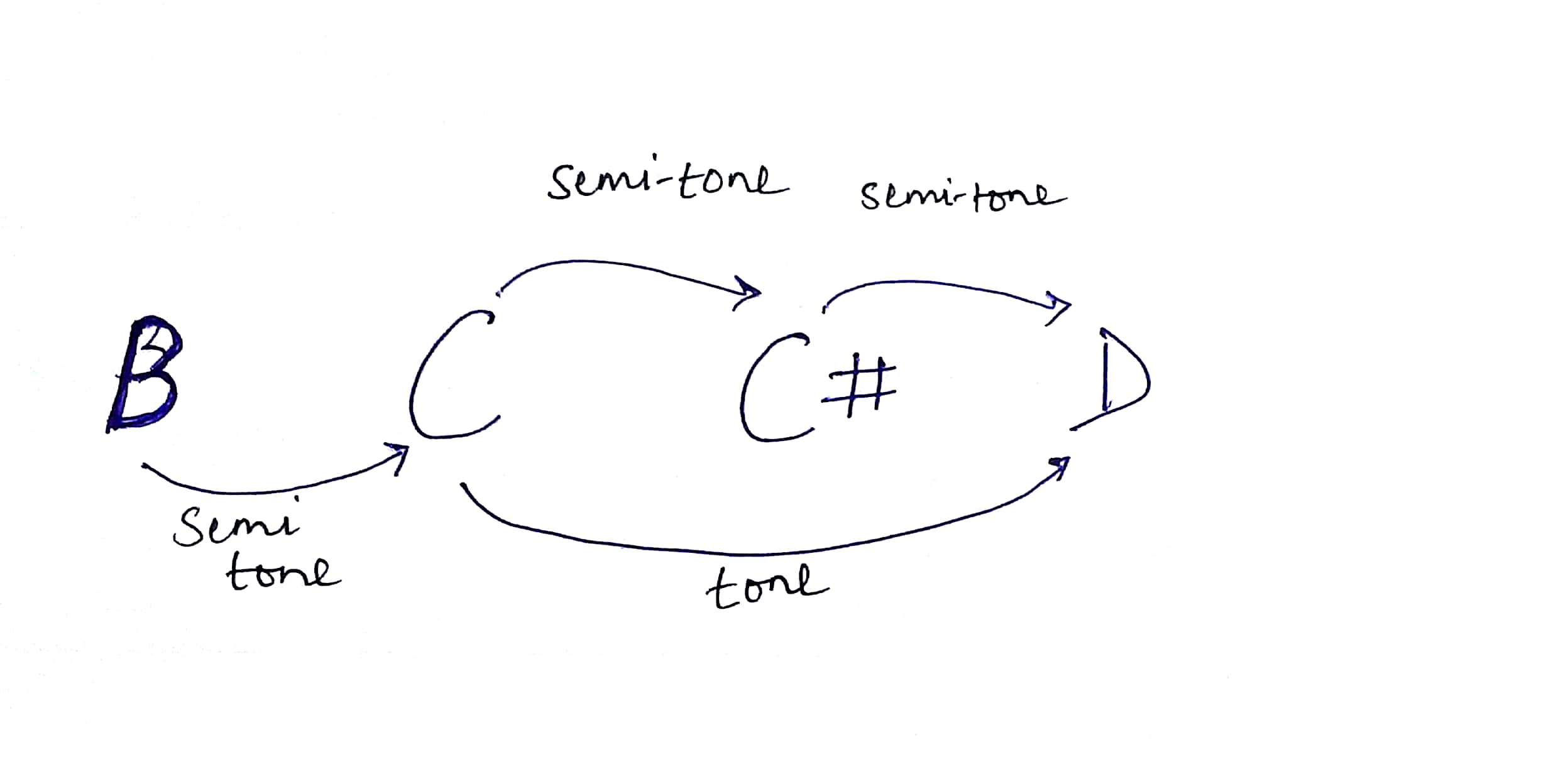 So far, we have covered notes, tone, and semi-tones.

Let us talk about scales. Have you heard of them? A lot of my friends shut down their brain the moment they hear about this word - scales. I try explaining to them that it is not as complicated as people assume. It is simple to understand. Once you have grasped the concept, you need to keep using it in your vocabulary so that you don't forget it. I do the same.

I love explaining to people what scales are or any music theory, hence this post. Another reason for writing this post is I want to use this as a reference for whatever music theory I have understood so far.

Scale is a combination of notes arranged in patterns that provides a template to compose or improvise depending on mood or feel. The notes are arranged in a particular pattern - not any random pattern. We will talk about what these patterns are in next few paragraphs.

So, why are scales important?

Scales are important because chords are derived from scales. Scales are building blocks of chords. I will explain how to get chords from a scale in a later post. Coming back to scales, they help you get familiarity with the different notes and help you understand how each note sounds. It is important to understand how each note of guitar sounds. Well, you don't start with hearing each note and remembering how each note sounds. But this should be your long-term goal. You can't play any combination of notes - they won't sound nice to the ears. Scales are a group of notes which when played together sound like music.

Ever seen someone listening to a tune and instantly playing that tune on the guitar? How do they achieve this skill? They have practiced the scales for quite some time. They have spent time transcribing notes on their instrument. Transcribing is the process of finding the note on the guitar that you have in your mind. Well, this takes time and comes with practice. Scales help you achieve this with ease.

What are different types of scales?

There are broadly two types of scales - major and minor. Well, there are others as well, like pentatonic scales. For starters, we will just focus on major and minor scales.

Remember that there is a pattern in the combination of notes for a scale. Both major and minor scales have a certain pattern in which the notes are arranged and it is this pattern that differentiates their sound and feel. Let us have a look at the major scale.

There you have the major scale. All you need is now to understand what these alphabets mean.

Moving on, next is minor scale. 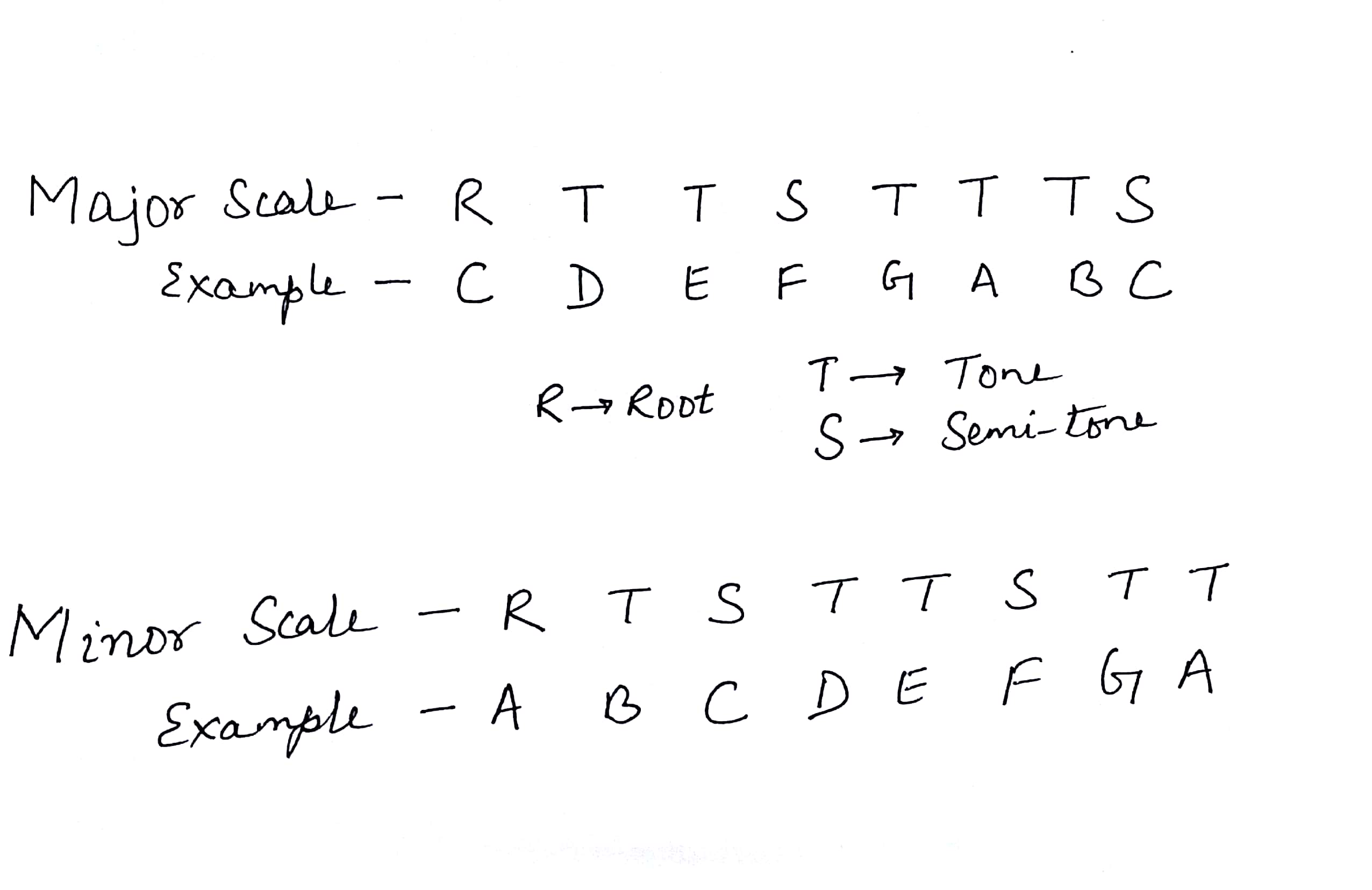 The moods of major and minor scale

Major and minor scales are often described in terms of the contrasting feel or mood they set. Major scale in general sets a happy and positive mood. Play a C-major scale and you will realise the mood is happy. The minor scale gives a feeling of sadness and melancholy. Play A-minor scale to see if it sets a little sad mood.

We know there are 12 notes in music (seven pure notes and five accidental). Each of these twelve notes has a corresponding major and a minor scale. So we have 12 major scales and 12 minor scales. Get familiar with scales. This is how my notes on scales look like. 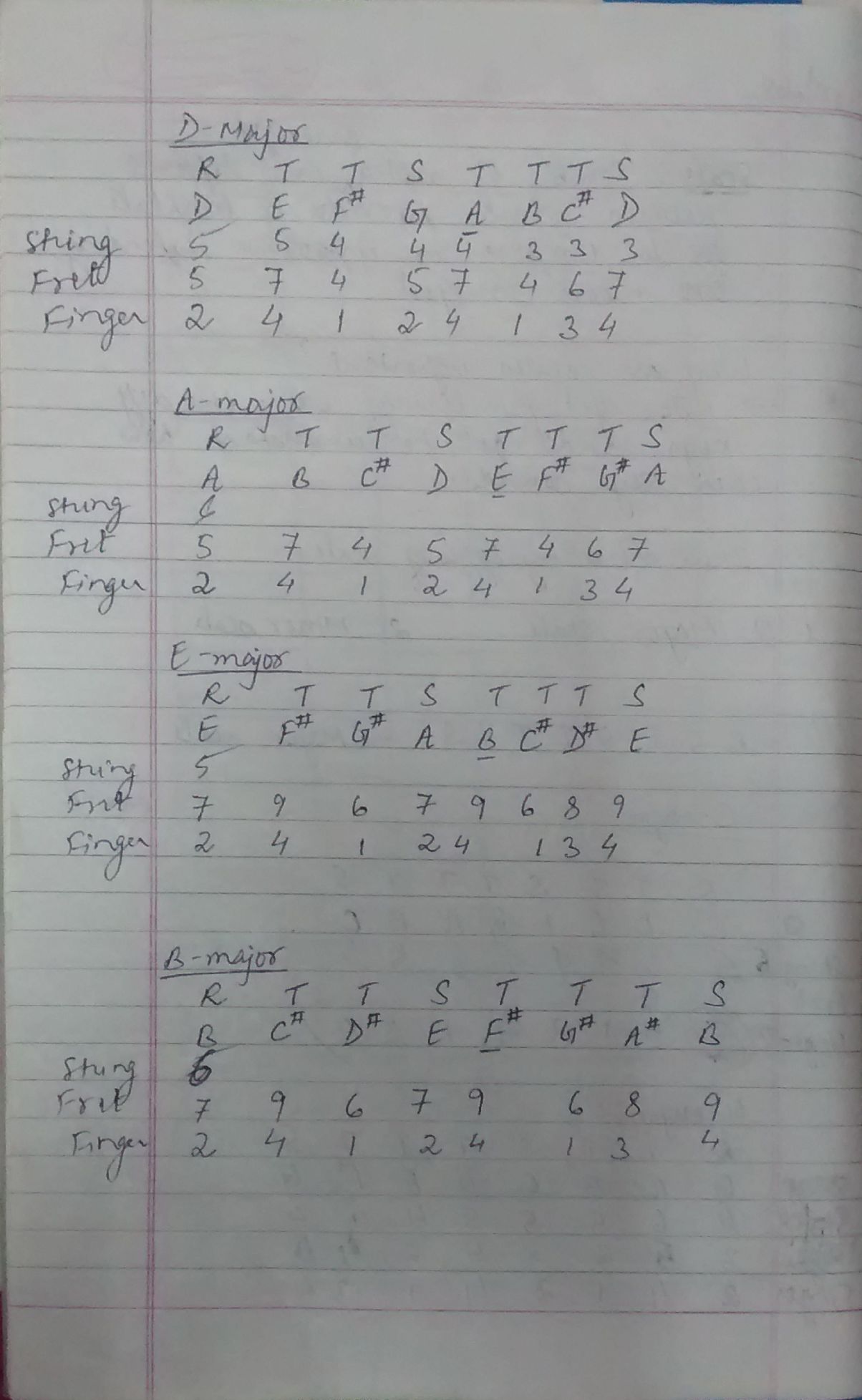 Try getting the notes of few of the major and minor scales, say G-major scale, D-minor scale or any scale you want. Do the same and I promise this will help you understand scales much better.

Now that we know what scales are, we will talk about chords in the next post. And in a few later posts, I will write more on music explaining the basic concepts.